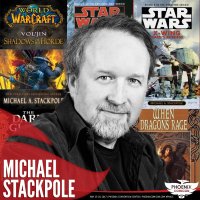 A New York Times Bestselling author, Michael A. Stackpole is best known for his work as a science fiction and fantasy author and game designer. He is also an advocate for digital publishing. Originally from Vermont, where we was awarded a BA in History at the University of Vermont, Stackpole now resides in Scottsdale. Stackpole has written numerous Star Wars novels, including books in the X-Wing and The New Jedi Order series. He’s also worked on the BattleTech series for over 20 years.