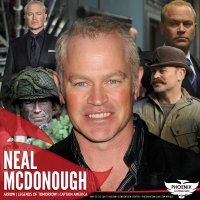 Neal McDonough is an American film, television, actor and voice actor. In 1991, McDonough won the Best Actor Dramalogue for Away Alone. McDonough has made many television and film appearances since then, including Band of Brothers, Boomtown, Star Trek: First Contact, Minority Report, and The Hitcher. Other roles include “Jason” in In The Line of Duty: Ambush In Waco and Dave Williams on the fifth season of Desperate Housewives. He also starred in the lead role on 2004 medical drama Medical Investigation for its one full season.
In 2011, McDonough jumped into the comic book movie universe as Timothy ‘Dum Dum’ Dugan in Captain America: The First Avenger. McDonough also voiced the character in the tie-in video game, Captain America: Super Soldier. He later reprised the role in the 2013 short film, Agent Carter, as well as made cameos in episodes of the Agent Carter series and Agents of S.H.I.E.L.D..
In 2012, McDonough had a recurring role in the third season of FX’s Justified as Robert Quarles, a sadistic mobster from Detroit.
In his most recent role, McDonough brought DC Comics villain Damien Darhk to life on the hit CW show, Arrow, and has since continued the role on DC’s Legends of Tomorrow.