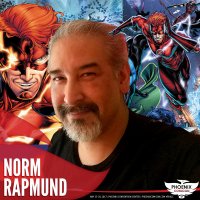 Norm Rapmund is an inker who made a name for himself during the early years of Image Comics on such titles as “Brigade,” “Supreme” and “Bloodstrike.” From there, Norm moved to Marvel where he worked on several titles including “Wolverine,” “Fantastic Four,” and “Rogue.” He later became known for his work with penciler Ian Churchill on “Coven,” “Lionheart,” “Superman/Batman,” “Supergirl,” and “Titans.”
Norm has continued to make his mark on a variety of DC titles including, 3-year run doing Finishes over Dan Jurgens on “Booster Gold,” “Time Masters: Vanishing Point,” as well as “DC Comics: The New 52,” “Teen Titans,” “Nightwing,” “Batman/Superman,” and “The Flash.” Currently Norm is inking DC’s REBIRTH with Brett Booth on TITANS and with Joe Bennett on DEATHSTROKE!