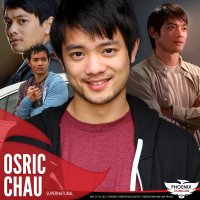 Osric was born and raised in Vancouver, Canada. He was a Canadian National Wushu Team member before landing his first leading role in the feature “Kung Fu Killer”, opposite Darryl Hannah and the late David Carradine, which was shot in Hengdian, China.
The following year Osric landed the role of Nima, the young Tibetan monk, in Roland Emmerich’s “2012” for Sony Pictures that grossed over $760 million worldwide. That success brought Osric back to China where he worked on the Chinese remake of “What Women Want” alongside Andy Lau and Gong Li, and Universal’s “The Man with the Iron Fists” opposite Russell Crowe, Lucy Liu and the RZA.
In 2011, Osric also co-led in the Paramount feature FUN SIZE opposite Victoria Justice, Thomas Mann, and Jane Levy. Directed by Josh Schwartz, the Halloween comedy also stars Chelsea Handler, Josh Pence, and Johnny Knoxville.
In 2012, and for 3 seasons after, Osric was on the hit CW series SUPERNATURAL as the beloved Kevin Tran, an unwilling prophet who becomes the pawn in the show’s never-ending fight between good and evil. That year, Osric was also one of the core characters in the long anticipated live action Halo film, Forward Unto Dawn.
Osric also finds the time to work on a number of independent film projects whether it be as an actor, producer, director, or writer. His passion is in filmmaking and to this end, he has produced, written and directed a number of short films.
Osric speaks fluent English and Mandarin and maintains residences in Vancouver, Los Angeles, and Beijing.