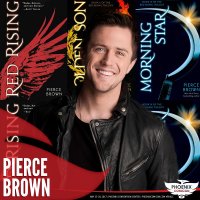 Pierce Brown is the New York Times bestselling author of Red Rising, Golden Son, and Morning Star. While trying to make it as a writer, Brown worked as a manager of social media at a startup tech company, toiled as a peon on the Disney lot at ABC Studios, did his time as an NBC page, and gave sleep deprivation a new meaning during his stint as an aide on a U.S. Senate campaign. He lives in Los Angeles, where he is at work on his next novel.