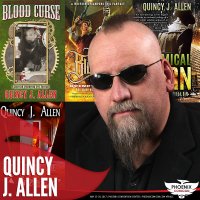 Quincy J. Allen, a cross-genre author, has published a litany of short stories in multiple anthologies, magazines, eZines, and one omnibus since he started his writing career in 2009. His first short story collection Out Through the Attic, came out in 2014 from 7DS Books, and he made his first short story pro-sale in 2014 with “Jimmy Krinklepot and the White Rebels of Hayberry,” included in WordFire’s A Fantastic Holiday Season: The Gift of Stories.
Chemical Burn, his first novel, was a finalist in RMFW’s Colorado Gold Contest in 2011, and his latest novel Blood Curse, Book 2 in The Blood War Chronicles, is now available in Print and Digital editions on Amazon and digital formats on Kobo, Barnes & Noble, iBooks, and Smashwords. He is currently working on his first media tie-in novel for the Aradio brothers’ Colt the Outlander IP, and expects that book to release in early-to-mid 2017. He also has a short story appearing in an upcoming Monster Hunters, Inc. anthology from Larry Correia and Baen due out in 2017.
He is the publisher and editor of Penny Dread Tales, a short story collection in its fifth volume, and a project that has become a labor of love. He also runs RuneWright, LLC, a small marketing and book design business out of his home in Colorado, and hopes to one day live in a place where it never, ever, ever snows.