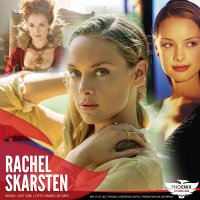 Rachel Skarsten started her acting career at age 14 when she was discovered by an agent after appearing on a local television program. At 16, she won her first major role playing the superhero Black Canary/Dinah Lance on the WB series Birds of Prey.
As a young girl, Rachel danced ballet with the Royal Academy of Dance and played competitive female ice hockey as a goaltender. Rachel attended the prestigious Claude Watson School for the Arts from grades 4 through 12 majoring in visual arts and the cello. Rachel earned a double degree in English Literature and Classical History with honors from Queen’s University.
After graduation, Rachel began acting again and had recurring roles on HBO’s Transporter: The Series, Flashpoint, The LA Complex, and CW’s Beauty and the Beast. She also appeared in The Vow alongside Rachel McAdams.
Rachel recently wrapped Lost Girl playing Tamsin from 2013 through its 5th and final season. You can also catch her on the big screen in the international blockbuster Fifty Shades of Grey.
Rachel recently joined the cast of the CW’s hit Reign as Queen Elizabeth the First and is currently filming Season 4.