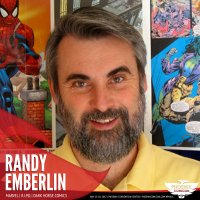 Randy Emberlin is a comic book artist/inker who has spent the past 30 years working in a variety of creative fields. Whether as an illustrator of educational books or an animator on over 50 television commercials, he has made his presence felt through his style and sensibilities.
Over the last 25 years he is probably best known for his work as an inker on over 4000 pages of comic art, with a resume that includes long runs for Marvel on Amazing Spider-Man, Web of Spider-Man, GI Joe, Doctor Strange and Alien Legion, plus additional work on X-men, Avengers, Punisher, Silver Surfer, She Hulk, the Defenders, Quicksilver, Captain America and Conan. For Dark Horse he had runs on Ghost, Star Wars: Crimson Empire II, Aliens and Predator, plus the R.I.P.D.graphic novel from the movie! Randy has worked with a wide range of pencilers and has many distinctive styles that fans are well acquainted with.
Randy’s presentation of “The Dynamic Art of Comics” is given at numerous Northwest schools. In July each year, Randy and his wife Judy also host 3 weeks of Summer Comic Book Art Camps for students, ages 8-18 in their hometown of Portland, Oregon.
www.randyemberlin.com