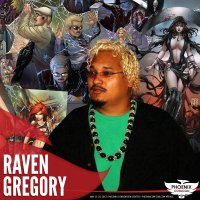 Raven Gregory was born in Phoenix, Arizona 1979, the youngest of three brothers.
Discovered in 2000 by then Vice President of Publishing at Top Cow Productions, Renae Geerlings, his first professionally published work was the critically acclaimed creator-owned comic series, The Gift, in 2003. The hit series would later be published by Image Comics as the writers’ popularity continued to grow.
Years later, the young writer would come to attention of Zenescope Editor in Chief and co-founder, Ralph Tedesco, who recruited him to the position of Executive Editor/Staff Writer of Zenescope Entertainment. Gregory would go on to co-create and write the best-selling Wonderland Trilogy series as well as numerous other Grimm Fairy Tales spin-offs, crossovers and creator owned titles.
In 2014 Raven left Zenescope to produce his own new line of creator-owned titles set to debut in 2015. Known for his incredibly dark, yet realistic stories of horror, his use of relatable personal tragedy, and powerful themes have made the writer a fan favorite across the nation. Raven currently resides in Arizona with his four children.