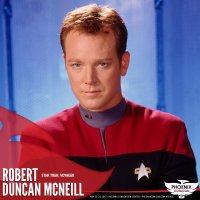 Robert Duncan McNeill is awesome. He likes long walks on the beach and Broadway musicals. His hobbies include skiing, motorcycling, old man naps and being funny. He’s done cool stuff like traveling to space, solving the international crime while working for a secret government organization, and drinking cocktails with middle-aged divorcees. These days he really just likes telling people what to do and how to act.
He enjoys a good pizza and his favorite color is midnight black with a very black hue. Did we mention he’s hilarious? He is skilled at things like making messes with food, helping old ladies cross the street and being witty. He’s down to earth, humble about his many accomplishments (too numerous to mention) and a very nice guy… just don’t bring up that one time he turned into a giant salamander and knocked up his captain…
Lesser known accomplishments include:
Being in a teenage love triangle on All My Children
Wearing really tight jeans, and what was that haircut?!?! in Masters of the Universe
His various guest spots on TV as the hunky funny guy
Being generally awesome on Star Trek as Tom Paris and even better… CAPTAIN PROTON!!
Producing and directing the hell out of Chuck on NBC. Yay Nerd Herd!!
Producing, directing and hanging out with beautiful women on Girlfriends Guide to Divorce on Bravo.
And last but certainly not least…
Taking his shirt off in Murder She Wrote