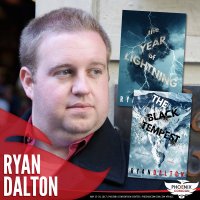 “Ryan Dalton is author of the young adult Time Shift Trilogy. His debut novel The Year of Lightning was released January 2016, and sequel The Black Tempest just released in April 2017. Ryan splits his time between writing books during the day, fighting crime at night, and hanging out in his awesome underground lair. Please do not tell anyone he’s Batman. It’s a secret.