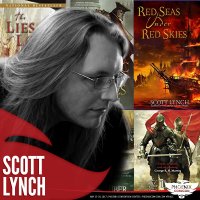 Scott Lynch is the author of four novels in the Gentleman Bastard sequence for Gollancz/Spectra. The Lies of Locke Lamora (2006) was a World Fantasy Award finalist; its sequels are Red Seas Under Red Skies (2007), the New York Times best-selling The Republic of Thieves (2013), and the forthcoming The Thorn of Emberlain. His short fiction has appeared in Popular Science, Swords and Dark Magic, Tales of the Far West, Fearsome Journeys, Rogues, Magic City, and the forthcoming Book of Swords. He was a Campbell New Writer finalist for 2006 and 2007 and won the British Fantasy Award for best newcomer in 2007. He lives in Massachusetts with his wife, SF/F writer Elizabeth Bear, three cats, a large dog, and several thousand books.