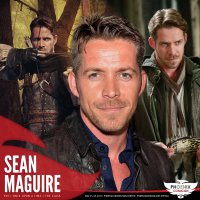 Sean Maguire began acting at age five in the motion pictures Voyage Round my Father with Sir Lawrence Olivier and Waterland with Jeremy Irons. He went on to television fame in the United Kingdom in the hit children’s series, Dodgem and Grange Hill followed by Dangerfield and the hugely successful series Eastenders.
Upon arriving in the U.S., Sean landed the title role in the TNT movie Prince Charming, with Christina Applegate and Martin Short. He went on to work on the independent films, The Dukes, Third Wish and L.A. Blues before being cast in the lead role in the Fox genre comedy, Meet the Spartans.
Sean has had lead roles in the WB series Off Centre, created by the Weitz Brothers, UPN’s Eve, and last season’s comedy series The Class on CBS, created by Jeffrey Klarik and David Crane (Friends). On stage, Sean has performed in Romeo & Juliet as Romeo, Joe Orton’s Loot, and Funny About Love. He is also a member of the Shakespeare Center of Los Angeles and BAFTA Los Angeles.
Most recently, Sean has been playing the role of Robin Hood on ABC’s hit series Once Upon a Time.