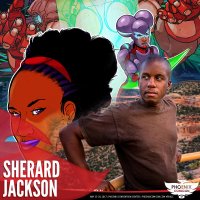 Sherard Jackson is a comic book artist, animator and writer whose work has been published by DC online, Devil’s Due Publishing, Image Comics, BOOM! Studios, Antarctic Press, and others. His animation work includes the Warner Bros. film, A Scanner Darkly, and Collection Agency Film’s, Flatland: the Movie. He is currently working on GALAXYS FOR HIRE for Devil’s Due, and other creator-owned projects.