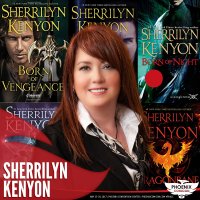 Bestselling author Sherrilyn Kenyon currently has more than sixteen million copies of her books in print, in over thirty countries. Writing as Kinley MacGregor and Sherrilyn Kenyon, she is an international phenomenon and one of the founding authors of the current paranormal craze (her first paranormal novel was published in the US in 1994). She’s the author of several series including: The Dark-Hunters, The League, Brotherhood of the Sword, Lords of Avalon and the forthcoming Nevermore and Chronicles of Nick. Her Lords of Avalon novels have been adapted by Marvel and her Dark-Hunter novels are now manga published by St. Martins and packaged by the talented Dabel Brothers. Her books always appear at the top of the New York Times, Publisher’s Weekly and USA Today lists in the US. The Kenyon Minions are a million strong and growing every day, all over the world.