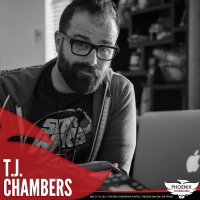 T.J. Chambers is a Los Angeles-based television writer, producer, and comedian. His work (and face!) has appeared on nearly every major network, from ABC to Syfy, as well as in the U.K. as a comedy writer and performer for ITV and Channel 4. He is a regular fixture at cons around the country, as a host, panelist, and fan!