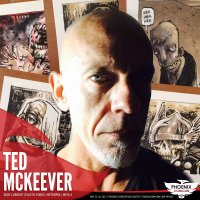 Ted McKeever is an adult male human, who for the last three decades, created unconventionally dark and demented comic books geared towards a very discerning audience. His first published work, Transit, appeared in 1986, establishing his trademark style. In the years that followed, he produced such critically acclaimed creator-owned titles such as Eddy Current, Plastic Forks, METROPoL, Industrial Gothic, META 4, Miniature Jesus, The Superannuated Man, and his autobiographical series Pencil Head. The latter of which details his thirty years of ups and downs in the comics industry, including working for Marvel and DC Comics, where he infected their mainstream sensibilities with his twisted interpretations of some of their most popular titles and characters.
He now runs his online store (http://tedmckeever.storenvy.com ), where he sells an eclectic mix of personal merchandise, including his comics, graphic novels, and original art from past titles. He also paints weird little 5″ x 5″ portraits whenever the creative process agrees with him, and is even known to resurface, from time to time, on Instagram.