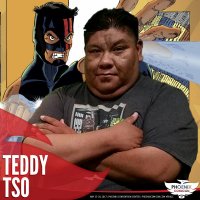 I am enrolled member of the Las Vegas Paiute Tribe. I have a younger brother; we were born and raised on a tiny thirteen-acre parcel given to my ancestors by a rancher named Helen J. Stewart. When we were younger both our parents were called back by the Great Spirit and our aunt and uncle took on the task of raising us.
As far back as I can remember I loved to draw comics and cartoons. I basically taught myself how to draw mainly from comics. When I reached high school I began reading comic books to study various comic book artists whose style I began to admire and study their ways of how they drew each page of the book they were illustrating.
That began the spark and I began to practice on my art trying to hone my craft into a style that would get me noticed by the major comic book companies. I eventually got up the nerve to submit some of my pencil samples to the big comic book publishers, I mailed several packets of samples but I was rejected by all of them, even the small independent publishers, saying that I needed more time to develop my storytelling. I took more time to study what they all told me to work on.
Not to be distraught I decided that I would try my hand at creating my own comic book, and I created a Native American superhero after noticing that there weren’t any comics that were written, drawn or even created by Native Americans! I saw that there was a need for a superhero that was Native American and he would be deal with Native issues coming on and off the various reservations of the southwest. With a focus I began creating Captain Paiute, the Indigenous Avenger of the Southwest! I would put Captain Paiute away for a spell and began focusing on other things.
I got my lucky break from a friend who went to the San Diego Comic Con and brought back a flyer from an up and coming writer who was looking for an artist. I submitted my work to him and a couple of weeks later I was drawing Masked Men issue #0! I got the opportunity to draw the characters again but this time it was published in Phil Yea’s Winged Tiger series.
I was then called into “tribal civil service”. I was voted to serve on the tribal council. I sat on the council for 3 terms, non-consecutively. During my time as a council member I got the chance to fly back to Washington D.C. and to meet with our state senators and the acting director of the Bureau of Indian Affairs to discuss the various issues that not only plague Indian Country, but also my tribe. I also had the opportunity to witness the 110th Congress both the House and Senate in session. For a native guy who only got to see that on C-Span I thought that was cool to see and hear them in person.
I still reside on the tiny thirteen-acre parcel that “us” tribal members so lovingly call “The Colony”, with my crazy mutt Wee Man, oh yeah I still draw comics!