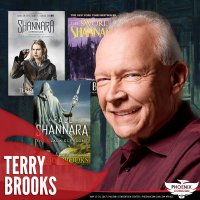 Terry Brooks has thrilled readers for decades with his powers of imagination and storytelling. He is the author of more than thirty books, most of which have been New York Times bestsellers. In 2017, Terry Brooks will be celebrating the 40th anniversary of his beloved Shannara series with the release of The Black Elfstone. Terry lives with his wife, Judine, in the Pacific Northwest.