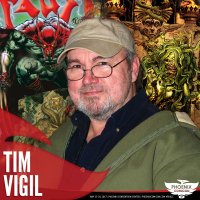 Tim Vigil is a comic book artist, mostly working in the horror/adult genre. His main graphic novel Faust was adapted by Brian Yuzna as the movie Faust: Love of the Damned (2001). The followup Faust: Book of M was nominated for the 1999 Bram Stoker Award for Best Illustrated Narrative.
Tim is responsible for creating the “DynaPop” style of art and was a key member of the Rebel Studios crew. He has done art for the comics anthology Caliber Presents at Caliber Comics; for the title Morella at Verotik (the comic book label of The Misfits leader Glenn Danzig); for Broken Halos Studios, such as Broken Halo, Gunfighters in Hell (featuring art by his brother Joe Vigil); and the artbooks Dark Utopia and Gothic Nights. Tim also created the titles: EO and Webwitch at Avatar Press.