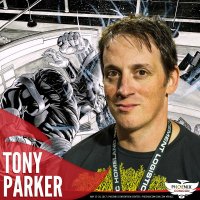 Tony Parker is an Eisner nominated comic artist and illustrator. He has drawn for nearly all major comic companies, is an Inkwell judge, and a former college professor. He was Eisner nominated for line art adapting Do Androids Dream of Electric Sheep as a graphic novel. He is a cocreator of both This Damned Band (Dark Horse) and Mayday (Image).