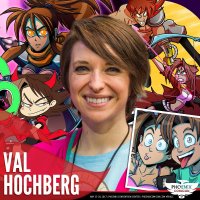 Val Hochberg (Val Brazier) was born in the freezing cold snows of Buffalo, NY but moved to the burning heat of the Phoenix deserts to pursue a comic career. She is the sole mastermind behind the ongoing comic series “Mystery Babylon”, following the adventures of Kick Girl (a demon who doesn’t kick people as much as her name would lead you to believe).
She really likes Star Wars, Dragon Age, and her Boosterific husband, Scott.