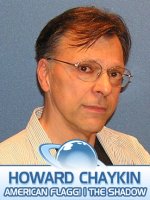 An American comic book writer and artist famous for his innovative storytelling and sometimes controversial material. His comics include Star Wars, American Flagg!, and Satellite Sam.

Howard Chaykin is a longtime veteran of the comic book business, serving as an artist and writer for nearly every publisher of comics in the past four decades…and counting. He took the ’90s off to work on what he terms “mostly unwatchable television”. He is responsible, some might say culpable, for introducing a number of previously unexplored themes to comic books. Chaykin’s influences include the comic-book artist Gil Kane and the mid-20th century book illustrators Robert Fawcett and Al Parker.

According to Chaykin he is generally better regarded by his colleagues than by the enthusiasts, a reality that serves his ego but not his wallet. Thanks to the above mentioned unwatchable television, he admits to usually being okay with that.

Howard Chaykin lives a quiet life on the California coast, hoping to dodge any imminent tsunamis so he can live long enough to die in bed, without ever lapsing into the cute old age so currently popular on movie and television screens.

DA: In the eighties, you famously (and wonderfully) re-invented him as a contemporary hero. This series takes you back to a ‘period piece’ (albeit ‘50s rather than ‘30s). Does a retro setting appeal to you more now, in terms of mood, atmosphere and potential? Or has the market changed?

HC: My understanding is that Dynamic has a guy doing a series that jumps off from my ’80s series–so I had no interest in either following whatever was going on there, or stepping on another professional’s toes. That led to doing a book that’s a lead up to my four parter from 1986–with a 1950s time frame and early cold war sensibility.

DA: I am, I have to confess, a huge fan of your work. Can you tell me (forget everyone else, I’m fascinated) something about your process as a writer and artist? Where do you begin? Script or visual storytelling?

HC: It’s a bit more organic than that. Concept first, then through line, a coherent ending, then working backwards to find the places to lay the pipe to get to that ending in a logical manner.

I don’t start drawing the first issue of any miniseries until I’ve finished the script on the last. This causes occasional aggravation to clients–Hi, Nick!–but it guarantees a far more coherent, cohesive and tight narrative.

For more of the Bleeding Cool Comics interview: http://www.bleedingcool.com/2014/05/22/howard-chaykin-interview/