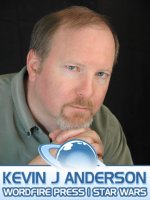 Kevin J Anderson is the author of 120 books, 51 of which appeared on bestseller lists with 23 million copies in print in 30 languages.

Kevin J Anderson has written spin-off novels for Star Wars, StarCraft, Titan A.E., as well as the Nebula Award-nominated Assemblers of Infinity and The X-Files. Anderson is the co-author of the Dune prequels with Brian Herbert. Anderson also collaborated with Dean Koontz on Frankenstein: Prodigal Son. He followed his epic Saga of Seven Suns series with his Terra Incognita fantasy trilogy, and wrote the novel Clockwork Angels based on the new Rush album. He recently launched a new comedic series featuring Dan Shamble, Zombie PI

Kevin J Anderson has also written several comic books including the Dark Horse Star Wars collection Tales of the Jedi written in collaboration with Tom Veitch, Predator titles (also for Dark Horse), and X-Files titles for Topps. Anderson’s superhero novels include Enemies & Allies, about the first meeting of Batman and Superman, and The Last Days of Krypton, the story of how Krypton was destroyed and the difficult choice two parents made for their son.

Anderson serves as a judge in the Writers of the Future contest.