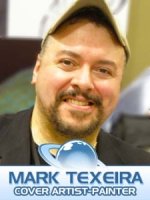 Born and raised in New York City, Mark attended Manhattan’s High School of Art and Design. He was granted a Presidential Scholarship at the School of Visual Arts where he attended for two years before dropping out to pursue a freelance commercial art career. During this period Texeira took classes at the Art Students League. His oil paintings soon won mentions at the Salmagundi Club and the Society of Illustrators. He would break out into comics in the 1980s.

Mark Texeira has an extensive list of credits and since 2015 has had published:

The Chronicles of Conan TPB vol. 29- “The Shape in the Shadows and Other Stories”; Ghost Racers #1; He-Man and the Masters of the Universe Minicomic Collection hardcover; A Hero’s Death; Doctor Strange #3 – “Eaters of Magic”; Hercules #2 “Titanomachy”.

As a fine art painter and storyteller Mark Texeira is known for his stunning covers on many Marvel comics making it difficult to name them all. Titles routinely associated with his name include “Ghost Rider,” “Black Panther,” “Moonknight,” and more.