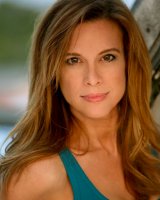 Named one of the world's "50 Sexiest Women" by Femme Fatales Magazine, Chase Masterson was first recognized for her break-out role as "Leeta" in the final five seasons of Star Trek: Deep Space Nine. Known to millions of fans worldwide, TV Guide's online readers poll voted Chase the "Favorite Science Fiction Actress on Television"; Sci-Fi Universe Magazine honored her as one of the "Top 20 People to Watch in Hollywood"; and, in 2010, UGO included her in their list of the "Top 25 TV Hotties, and the Schlubs They Inexplicably Love." In December 2009, AOL named Chase one of the "Ten Sexiest Aliens" in television history.

Chase has held recurring roles on General Hospital and Live Shot; guest starred on programs such as E.R., Presidio Med, Sci-Fi Vortex, Sliders, and Acapulco H.E.A.T.; and served as host of Sci-Fi Entertainment, Showtime: Nighttime, and Encore's STARZ On Demand. Her film credits include Yesterday Was a Lie, Robotech: The Shadow Chronicles, Stephen King's Sometimes They Come Back For More, Robin Hood: Men In Tights, In a Moment of Passion, Married People Single Sex, Sammyville, Manticore, Chastity, Terminal Invasion, Creature Unknown, and Comic Book: The Movie. Chase's recent producing credits include the documentary Through Your Eyes with Michael Madsen and David Carradine (featured twice on Dr. Phil), and the short L.A. Actors with Tony Shalhoub and Brandon Routh.

An accomplished jazz singer, she has received high praise for her music from magazines such as Film Score Monthly and Entertainment Today. Chase hosted her own weekly internet radio show on TheFandom.com, and has been singing in USO Tours for the Navy and the Marine Corps. She was selected as one of the "Hot Leading Ladies" of film by Film Fetish for her role in Yesterday Was a Lie, and was named "Best Feature Film Producer" by the LA Femme Film Festival.

Best of all, "Chase Masterson" was recently the answer to a question on Jeopardy. (Well, that's up there, anyway...)

What does it mean to be human?