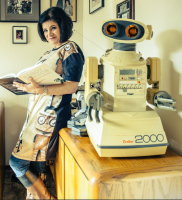 Dubbed as the “Real-Life Susan Calvin” by Isaac Asimov in 1989, Joanne Pransky, the World’s First Robotic Psychiatrist® is a renowned robotics expert and futurist who facilitates the integration of robots into everyday life, bridging the gap between the real and science fiction.

Joanne has been working in the robotics industry for over three decades and as a Robotics Industry Ambassador, has been a burgeoning voice in the now-official field of human-robot interaction. Joanne was one of the co-founders and marketing director of the first medical robotics journal, The International Journal of Medical Robotics and Computer Assisted Surgery. She served as a senior sales and marketing executive for a major industrial robot manufacturer and has been an associate editor for Industrial Robot Journal for the past 25 years. She is also a frequent contributor to Robotics Business Review.
On the entertainment side, Joanne was an official judge on the television-hit series of live robotic combat, “Comedy Central Sports Presents BattleBots”, a judge for the Loebner Prize in Artificial Intelligence, and a judge for the First Robot/Human Arm Wrestling Competition. She consulted for the films Eagle Eye and Ender’s Game, in which she brought never-seen-before medical robots and real users of robotic technologies from various parts of the world onto the big screen. Most recently, she consulted for the documentary film (in production) featuring the humanoid BINA48, who became the first robot/AI in the world to complete a college class. Known for her humor and unique ability to generate enthusiasm for the future of robotics, Joanne has appeared on numerous television shows and documentaries including CNN, The Tonight Show, the Discovery Channel, MSN and the NTV Russian Broadcasting Channel.