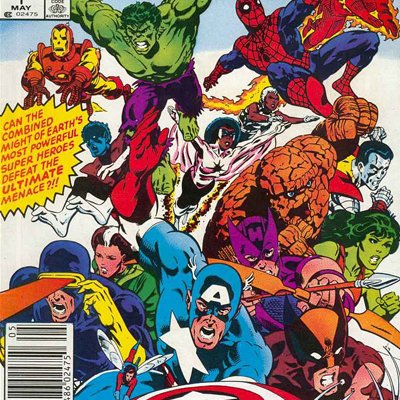 Jim Shooter and Bill Jemas are two giants in the history of comic book publishing. Jim Shooter was the Editor-in-Chief of Marvel Comics for nearly a decade. He created Valiant Comics, Defiant Comics, and Broadway Comics. Bill Jemas is launching Double Take Comics this fall, and is the former President / Publisher and head of Marvel Comics, as well as the former President of Fleer Entertainment. They will discuss the comic book marketplace, their role in it (past and present), and their thoughts on why things are the way they are. If you are a fan of comic book history, you will not want to miss this once in a lifetime opportunity! Jim Shooter oversaw some of Marvel's greatest successes, including Chris Claremont and John Byrne’s run on the Uncanny X-Men, Byrne’s work on the Fantastic Four, Frank Miller’s Daredevil, Walt Simonson’s Thor, and Roger Stern’s runs on both The Avengers and The Amazing Spider-Man. He helped usher in the age of the direct market, creator royalty programs, and the creation of the Epic imprint for creator-owned material in 1982 as well as the launch of Marvel’s New Universe in 1986. He introduced company-wide crossover events, with Marvel Super Hero Contest of Champions and Secret Wars. In 1984, Shooter and Marvel became the first to collect and reprint popular comics storylines as stand-alone trade paperbacks with X-Men: The Dark Phoenix Saga and Iron Man: Demon in a Bottle. The practice is now the foundation of comics publishing in North America. Under Jim Shooter, Marvel Comics had its best sales since the 1960s. Following his tenure at Marvel, Jim and a group of investors launched Valiant Comics, which stormed the market and sold more than 80 million books in its first five years. Its characters have seen print in numerous languages across the globe and have been featured in best-selling video games. Following his departure from Valiant, Shooter founded Defiant Comics, and Broadway Comics. Bill Jemas became president of Fleer Entertainment Group and Fleer Corp in 1993, and was appointed executive vice president of Marvel Entertainment Group that year. In January 2000, he became president of consumer products, publishing and new media — essentially Marvel Comics’ publisher. During his tenure, Jemas appointed Joe Quesada Editor-in-Chief. He oversaw the creation of Marvel's Ultimate Comics line, the revival of the Epic line, the creation of the Marvel MAX line, and the removal of the Comics Code from Marvel books. He increased Marvel’s publication of trade paperbacks, and is credited with sheparding the company from bankruptcy to profit. He is set to shake things up again this fall with the launch of Double Take Comics.