Sergio and the Holograms –- is a tech-progressive live performance, involving life-sized hologram projections; a visual like no other. Originally, the show began as a one-man-band on YouTube, arranging video game music onto multiple instruments. The core of inspiration was the insatiable desire to perform these arrangements live. Ambitious with a vision, the production was then revamped and the hologram-band was born. The process involves learning, recording, and filming all of the instrumentation, to then have it displayed onto multiple “hologram” screens. This creates a hologram-band around him, while in person, he plays guitar/sings as the front-man. His repertoire ranges from video game arrangements, 80’s covers, and originals. With his hologram production, he has successfully merged a balance of technology and music; which genuinely reflects the influence Silicon Valley has had on him. This act has been performed at highly acclaimed conventions such as PRGE (Portland Retro Gaming Expo), MAGWest, and Game On Expo. Sergio and the Holograms will be performing rocked-out arrangements from game titles such as: The Legend of Zelda, Super Mario Bros, Metroid, Mega Man, Street Fighter, Castlevania, DuckTales, and many others. Follow his work here: YouTube.com/SergioElisondo Instagram.com/SergioElisondo Facebook.com/SergioAndTheHolograms SergioElisondo.com 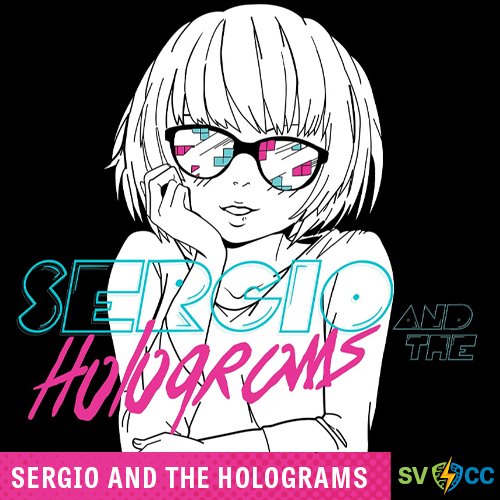