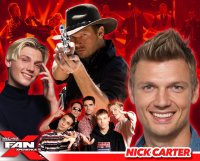 Nick Carter is an American singer, actor, screenwriter and director. He is best known as a member of the pop group the Backstreet Boys. Carter has released three solo albums, Now Or Never, I’m Taking Off and All American during breaks between Backstreet Boys schedules, and a collaboration with Jordan Knight titled Nick & Knight. He has made occasional television appearances and starred in his own reality shows, House of Carters and I (Heart) Nick Carter. He gained fame in the mid 1990s and early 2000s as a teen idol. He is also the older brother of singer Aaron Carter.

Carter made his motion picture debut in 2013, appearing in the comedy This Is the End along with the rest of the Backstreet Boys. In 2015, Carter revealed his plans to film a movie that he had written, and would be starring in. Entitled Dead 7, the film focuses on a ragtag band of gunslingers operating during a post-apocalyptic zombie plague. The film also stars Carter’s wife, Lauren, and his band mates Howie Dorough and AJ McLean. In addition NSYNC’s Joey Fatone, O-Town’s Erik-Michael Estrada, Jacob Underwood and Trevor Penick, and 98 Degrees’ Jeff Timmons will also star in the movie. The movie started filming in August 2015, and will be shown on the Sci Fi channel in 2016.