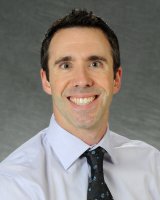 Dr. Kris Lehnhardt is the Element Scientist for Exploration Medical Capability in the NASA Human Research Program. He has appointments as Senior Faculty with the Baylor College of Medicine in the Center for Space Medicine and the Department of Emergency Medicine. He is board-certified in Emergency Medicine in both Canada and the U.S.A., and he works clinically in the Emergency Department at the Ben Taub Hospital in Houston, TX. Previously, Kris was an Attending Physician and Assistant Professor at The George Washington University (GWU) School of Medicine and Health Sciences. A reservist in the Royal Canadian Air Force, a private pilot, and a PADI advanced open water SCUBA diver, Kris has had an active role in NASA’s Human Research Program since 2017. His main research interest focuses on the provision of medical care in extreme environments (space, military, wilderness, etc.). He completed his M.D. and Emergency Medicine residency at Western University in 2003 and 2008 respectively and he received his B.S. in Biomedical Sciences from the University of Guelph in 1999.

Heroes of the Storm

Plaza on the Avenida