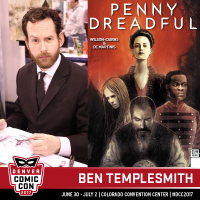 The award-winning Ben Templesmith returns to Denver Comic Con! Ben is an Australian comic book artist best known for his work in the American comic book industry, most notably the Image Comics series Fell, with writer Warren Ellis, and IDW’s 30 Days of Night with writer Steve Niles, which was adapted into a motion picture of the same name.

His other projects include the critically acclaimed serial Wormwood: Gentleman Corpse, as well as Welcome to Hoxford, and Singularity 7, all of which he also wrote.

He has also worked on the Star Wars, Doctor Who, GI Joe, Army of Darkness, Silent Hill and Buffy: The Vampire Slayer properties. He has also created book covers, movie posters, trading cards, and film concept work, as well as producing art and design for music bands, dvds, and toys.