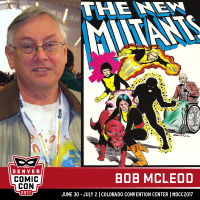 Bob McLeod is a comic book penciller and inker best known for co-creating New Mutants with writer Chris Claremont. He is a top inker at Marvel and DC and has worked on many series, including The Legion of Super Heroes, Detective Comics, Wonder Woman, and The New Titans, as well as penciling The Incredible Hulk, Conan the Barbarian, Star Wars and several Spider-Man fill-ins for Marvel. He drew several issues of the The Phantom comic and has written and illustrated a children’s book, Superhero ABC, which was published by HarperCollins and received starred reviews from School Library Journal and ABA Booklist. He has also edited Rough Stuff magazine for TwoMorrows Publishing, a magazine featuring interviews and art by top creators in the comics field. McLeod currently teaches part-time at the Pennsylvania College of Art and Design in Lancaster, Pennsylvania.