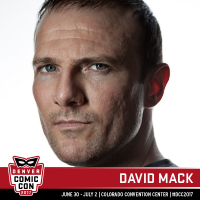 Mack created artwork for the the opening titles of the new Jessica Jones Netflix TV series (winner of the Peabody Award), based on the book he was co-collaborator on. The opening titles he worked on with Imaginary Forces garnered an Emmy Nomination in the category of Outstanding Main Titles.

For the Academy Award nominated film Captain America: The Winter Soldier, Mack created the art & concept for the titles sequence with Sarofsky Designs, which received recognition for the Excellence in Titles Design Award.

Mack’s work has garnered nominations for seven Eisner Awards, four International Eagle Awards, and both the Harvey and Kirby Awards in the category of Best New Talent, as well as many other national and international awards and nominations.

Mack’s KABUKI books have been the subject of under-graduate and graduate university courses in Art and Literature, and listed as required reading. His work is on exhibit in the Philadelphia Museum of art with Michelangelo, Titian, & Rubens. His work has been studied in graduate seminars at USC and hung in the Los Angeles Museum of Art. He’s lectured at universities and taught classes in writing, drawing, and painting all over the world, including a Masterclass at the University of Technology in Sydney, Australia, for Japan’s School of Communication Arts of Tokyo, Nagoya, and Osaka, and an invitation to speak at Harvard as the Guest of Honor at their annual Science Fiction Writing convention.

Mack created the final two seasons of Dexter Early Cuts episodes for Showtime (the first, collaborating with legendary artist Bill Sienkiewicz). The latest season earned him nominations for both the Writers Guild of America and the Producers Guild of America.

In 2013 Mack had exhibits in Los Angeles & Chicago of his work presented with originals of Gustav Klimt & Egon Schiele, and spoke in Barcelona at the OFFFest presentation of trailblazing artists and designers.

Mack’s paintings were exhibited in Paris and Brussels with successful gallery openings and book store signings. The documentary film on Mack’s work, The Alchemy of Art, was awarded the top prize at the 40th annual Worldfest Film Festival among other film awards & in 2012 Mack delivered an inspiring TED Talk.

In 2016 the US State Dept. honored Mack as an official Ambassador of Arts & Story selected to travel abroad to teach storytelling in other countries, beginning in Tblisi, Georgia, joining efforts with the US embassy there.

In 2004 Mack, with Brian Michael Bendis & Mike Oeming (M.O.B.- Mack, Oeming, Bendis), formed a new imprint at Marvel Comics which they named ICON, to publish their creator-owned comics KABUKI and POWERS. ICON continues as an imprint of Marvel to this day publishing some of the most successful creator-owned comics, including KICK-ASS.

David Mack is one of the only creators to be listed in both the Top Ten Writers List, and the Top Ten Artists List in Wizard Magazine. Mack’s writing and art on KABUKI, have earned him international acclaim for his innovative storytelling, painting techniques, and page design. KABUKI has been translated in seven languages, in addition to nearly two million copies of KABUKI Comics, Paperbacks, and Hard cover graphic novels in print in the U.S. The series has launched successful lines of action figures, toys, and art objets (many of which were featured on Showtime’s TV show DEXTER). Mack has exhibited his work in Europe, Asia, and America with gallery shows, and book signing tours in over a dozen countries. He was the first American to be nominated for Germany’s most prestigious Max-Und-Moritz award in the category of Best Imported Comic.