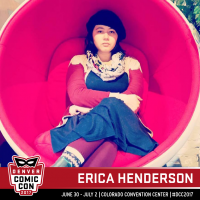 In the last few years, readers have been fortunate to see Erica Henderson’s art of some of the hottest comics from a variety of publishers. For several years, Erica has been doing covers and interiors for Subatomic Party Girls (Monkeybrain Comics) and Quantum Woody (Valiant), and covers for Marvel (Secret Wars, Doctor Strange, Spider-Gwen and Gwenpool) and KaBoom! (Bravest Warriors). But it’s her work on Archie Comics’ Jughead and Marvel’s Unbeatable Squirrel Girl that has taken the comics world by storm! With her interiors on the rebooted Jughead comic, Erica has been in on the ground floor of Archie’s re-envisioning of the adventures of the gang from Riverdale – introducing the CW’s TV series of the same name – and her work on Marvel’s unique sciurian superheroine has proven that comic art can be whimsical and still be entertaining for both kids and adults!