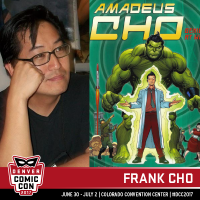 Frank Cho is a Korean-American comic strip and comic book writer and illustrator, known for his series Liberty Meadows, as well as for books such as Shanna the She-Devil, Mighty Avengers and Hulk for Marvel Comics, and Jungle Girl for Dynamite Entertainment. Frank is noted for his figure drawing, precise lines, and depiction of well-endowed women. Cho wrote and illustrated Savage Wolverine in 2013, and in 2016, Marvel premiered Totally Awesome Hulk, a series written by Greg Pak and drawn by Cho which sees teenager Amadeus Cho become the newest incarnation of the Hulk.