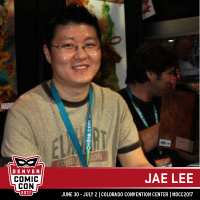 Jae Lee was born in South Korea in 1972. His first professional work was for Marvel Comics on an anthology series titled Marvel Comics Presents. “When I first started, I was heavily influenced by John Byrne,” Jae said in [an] interview published at DynamicForces.com. “I tried to draw just like him.” He ended up working with Byrne who was writing Namor the Sub-Mariner and ended up leaving his unique mark on Namor as well as other Marvel classics such as Spider-Man, The Uncanny X-Men and X-Factor.

He attended art school, but left in 1990 to pursue a career at Marvel Comics, becoming the youngest professional artist ever to work for a major comic book company. He is probably best known for his work on the aforementioned Namor the Sub-Mariner, Inhumans (for which he won an Eisner Award), and The Sentry, as well as his creator-owned character Hellshock at Image Comics, and Marvel Comics’ spinoff of Stephen King’s The Dark Tower novel series, The Gunslinger Born, which was scripted by Peter David. Currently, his instantly-recognizable style can be seen on covers for most of the comics companies, including DC, Marvel, Dynamite and Image.

He is not related to fellow comic book creators Stan Lee, Jim Lee, Pat Lee, or Elaine Lee. Find him on www.jaeleeart.com.