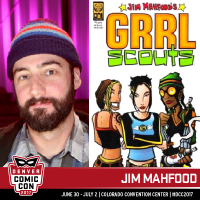 Jim Mahfood (a.k.a. Food One) is known for a variety of comics, particularly two comics based on Kevin Smith’s movie Clerks, and his creator-owned comic book series Grrl Scouts, Bad Ideas and his comic strip Stupid Comics (which appears weekly in the Phoenix New Times). His instantly-recognizable art style is heavily influenced by graffiti and underground hip hop culture, but he has also done “mainstream” work for Marvel Comics on various Spider-Man titles, including Ultimate Marvel Team-Up and Spectacular Spider-Man.