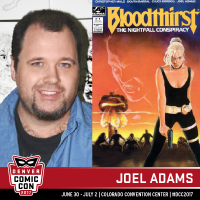 Joel Adams, eldest son of Neal Adams, graduated the School of Visual Arts in New York and, after dabbling in comics, decided to make his career in Los Angeles in the animation industry.
Joel was the character designer for the first three years of, and shares an Emmy Award for, the legendary animated television series King of the Hill.

Joel currently manages Continuity Studios in Burbank, California, which produces computer animation, such as the Nasonex Bee, and Bongo the Dannon Monkey, for major advertising agencies, and advertisers.