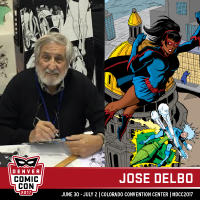 Creator of last year’s gorgeous cover art, José Delbo has worked in the comic industry for over 50 years! Born in Argentina and publishing his first art at the age of 16, Delbo eventually moved to the United States in 1965. His earliest contributions were to classic comic adaptions of TV and Westerns such as: Lone Ranger, Judge Colt, The Twilight Zone, The Brady Bunch, The Monkees and more.

He returns to Denver Comic Con to continue the celebration of 75 Years of Wonder Woman and as the new movie finally brings the character the pop culture attention she deserves. He began his legendary run of more than five years on the WW comic, starting with issue #222 (1976). With the popularity of the TV show, he (with writer Martin Pasko) transported Wonder Woman back to the era of the 1940s, and when the show changed back to the 70s, he collaborated her return to a contemporary timeline. He even helped bring back the dead Steve Trevor in issue #271.

Following WW, José worked at DC and Marvel penciling iconic comics and characters: Superman Family, Batman Family, and lengthy and multiple runs on Thundercats, and Transformers. Even casual readers from the 80s and 90s will recognize his work on eclectic books from Rainbow Brite to NFL Superpro.