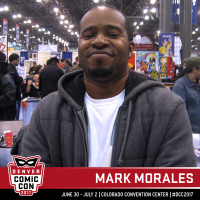 A longtime comics pro, Mark Morales has worked for many companies including Image, Dark Horse, Chaos, DC Comics and Marvel Comics, mostly as an inker. Past projects include Thor, Daredevil, Batman, X-men, Justice League, Avengers vs X-men, Convergence and Siege. Currently he is working on Spider-man/Deadpool for Marvel Comics and a issue of All Star Batman for DC Comics.