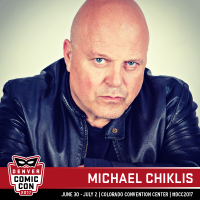 Chiklis plays Captain Nathaniel Barns on Gotham, played the The Thing in two Fantastic Four films, and won the Primetime Emmy Award for Outstanding Lead Actor in a Drama Series for his work on The Shield. He is also known for his roles on American Horror Story, The Commish, No Ordinary Family and Vegas.