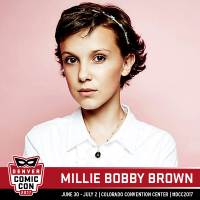 Millie Bobby Brown can currently be seen in the Netflix hit series Stranger Things in which she stars opposite Winona Ryder and David Harbour for the Duffer Brothers. Her star turn as “Eleven” has been earning her incredibly high praise and she recently shot up to number one on IMDB’s Star Meter. Previously, she was cast after an extensive search as a lead in the BBC/BBC America series Intruders opposite Oscar-winner Mira Sorvino and John Simm. Before Intruders, Brown appeared in a recurring role on the ABC series Once Upon a Time in Wonderland as Young Alice. Shows in which she has had guest-starring roles include CBS’s NCIS, ABC’s Modern Family and ABC’s Grey’s Anatomy.