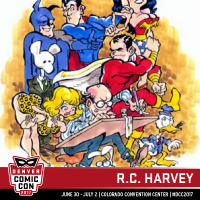 R.C. Harvey is a one-time freelance cartoonist and all-time comics historian, critic, and all-around cheerleader for the arts of cartooning. Harvey received no formal training in cartooning and very little in writing, other than actual experience on the campus newspaper at the University of Colorado, from which he graduated in 1959. Harvey’s first encounter with magazine cartooning was in college, where he drew cartoons for the campus humor magazine. After college, Harvey freelanced at cartooning in New York City for a time, then went into the Navy. Upon discharge after three years, Harvey turned to teaching. He has been writing about cartooning for well over a quarter of a century, beginning with a column in the Menomonee Falls Gazette (a weekly newspaper of comic strips) in the fall of 1973. An associate member of the National Cartoonist Society (NCS) and of the Association of American Editorial Cartoonists (AAEC), and a member of the Comic Art Professional Society (CAPS), Harvey writes regularly for The Comics Journal and Cartoonist PROfiles and occasionally, for the Comics Buyer’s Guide, Comic Book Marketplace, and Hogan’s Alley. He has authored several books on comics, including The Art of the Funnies (1994, an “aesthetic history” of the comic strip), The Art of the Comic Book (1996), both from the University Press of Mississippi.