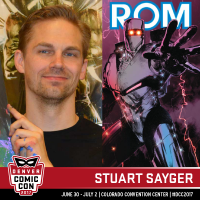 Stuart Sayger is a professional illustrator who works primarily in the comic book industry. Known for his moody, atmospheric art. Sayger first broke into the industry as the creator of Shiver In The Dark, producing the comic independently from start to finish. Sayger’s recent published projects include: Rom and Micronauts for IDW and a recent commemorative issue of The Walking Dead. Sayger also drew graphic novels of Trick R Treat and Krampus based on the films of the same names from Legendary Pictures. Other well-known projects include the Superman: Man of Steel movie, and a video game adaptation of Robert Kirkman’s Thief of Thieves. Sayger has drawn many Other IDW projects including The X-Files, 30-Days of Night, Robert Rodriguez’s Machete, and Bram Stoker’s Death Ship.

Toy fans will remember Stuart’s work from a 2-year run drawing the Bionicle comic book based on the popular Lego toy line of the same name. The series was translated to 8 different languages and distributed internationally boasting the largest circulation of any comic book in the world!