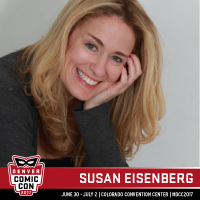 Eisenberg has been featured in national television campaigns for Fancy Feast, Kenmore, Gatorade, Moet & Chandon, Pioneer Electronics, and Microsoft. She has recorded promos for CNN, and voices all of the television and radio commercials for The Salvation Army.

Susan Eisenberg studied acting and voice at American University in Washington, DC, The American Academy of Dramatic Arts in New York City, and the University of California, Los Angeles.