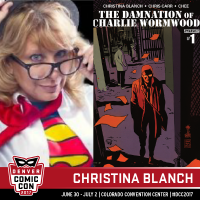 Christina Blanch is a relative newcomer to writing comics, but not new to the world of comics. She has taught college level courses using comics and has run two very successful massive, open, online courses (SuperMOOCs) on Gender through Comics and Social Issues through Comics to over 10,000 people. She is the author of several chapters for academic books on comics as well as co-writing The Damnation of Charlie Wormwood, both a digital comic published by Thrillbent and a print comic published by Dynamite. She has contributed stories to Aw Yeah Comics and is working on another title, Resolute Bay, with artist Patrick Yurick.